It all started because of a dentist appointment.  A little extra time, and voila!

I scraped and sanitized a bunch of bombers and 12 bottles today.  This will prepare me for my next brew.

Then I bottled SMaSHing Nuggets.  I put some into a Beer Box, some in bombers, and some into 12 ounce bottles.  The OG was 1.048 and the FG was1.015.  ABV rings in at 4.5% – makes for a good session beer.  The uncarbonated beer tastes a little earthy and peppery…I think it will be quite tasty!

I attached a pic of the brewing notes.  Feel free to try it out!

One thing that is important in home brewing, is sharing information.  Homebrewfinds.com is a perfect example of this!  I find myself checking out the site frequently to see what Chris has posted.  I will be featuring a post with an interview with Chris in the near future.  Disclaimer time – when you go to his site and find out there is something out there that you “need”…..don’t blame me for “needing” to spend the money.

Chris has a great social media presence, and can help you find some great deals.  Did you find a great deal someplace?  Drop him a line and let him know.

So people have been asking about this ghost pepper beer that I brewed for the Making Dad With Chip and Zach.

Last year, I grew some ghost peppers in the back yard.  I got a few, shipped some off to a friend, and dried two out.  I hung them up on string in the corner of the kitchen, so no little fingers would touch them.  Chip Dolce, of the Making Dad Show asked if I was ever going to brew with them.  I said I would, as long as I came up with a decent recipe to work with them.  So after lots of thinking,  I decided that a Mexican Cerveza would be a good choice.  I sought out some Mr. Beer kits.  I combined multiple kits to make the beer a little stronger, and hook up with a 2.5 gallon recipe or so.  So two ghost peppers in the brew, and the name came about of TOO HOT MAMA.

“Glad I stopped down to check on the Too Hot Mama fermentation. It was bubbling out of the airlock. Must have been ONE of the ghost peppers trying to do dastardly deeds.”

I quickly rigged up a blow tube setup as shown below.  Before the fermentation was done, the growler was cloudy with chunks of wort and pepper seeds in it.

So back to the crazy thinking.  I took some home grown chili peppers and soaked them in tequila.  Ten of those peppers went into my first variant bottling ever.  I floated them in there and changed those bottle names to TOO HOT MAMA – MSHW.  What is MSHW you may ask? My Smoking Hot Wife.  This is a tribute to that minister who did a NASCAR prayer before the race and thanked God for his smoking hot wife (search it on youtube….worth the watch).

Well, Too Hot Mama, and the variant rang in at 5.6%. Don’t think this ghost pepper beer is a session beer though……although it is quite tasty.  Pair it with Doritos, chicken wings, or chili and you are on the right track!

Want to hear what Chip and Zach think of it?  Check out http://makingdadshow.com and check out episode 27 (being released on 10/26/15) 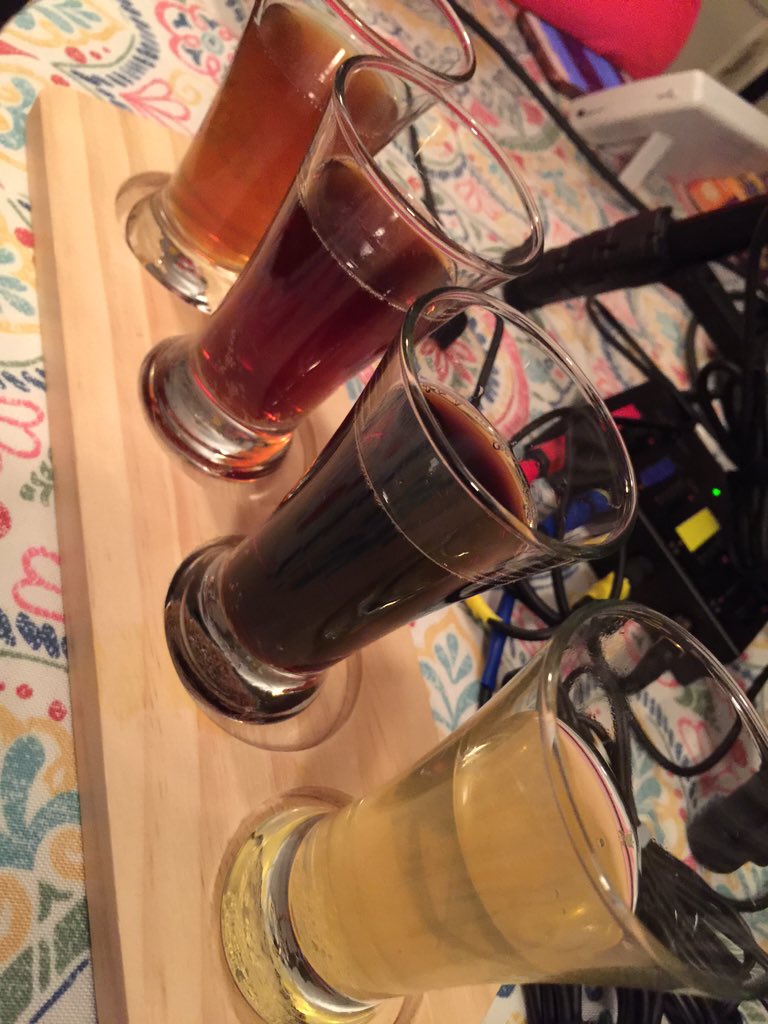 Making Dad with Chip and Zach has a new member on their extended team.  The comedy podcast about fatherhood decided to challenge a local homebrewer, Jerry Scoppa, with making a spooktacular brew, and the challenge was accepted.  During the show, Brewmaster Jerry Scoppa  presented them with a few homebrews and one special Halloween treat.  The treat was a brew that used ghost peppers as a main ingredient.  Brewmaster Jerry was also given the title of Official Brewmaster of Making Dad during the show.

During the the broadcast, Chip Dolce and Zach Anderson were able to taste some homebrewed hopped hard apple cider, made from juice from the local supermarket, a chocolate peanut butter stout, a citrusy IPA and the ghost pepper beer.  Zach has issued a new challenge to Brewmaster Jerry of creating a cookies and cream beer for their tasting delights.  As a special gift to the listeners, Mr. Beer© , a home brewing system company, provided some special prizes for their listeners.

Making Dad with Chip and Zach is a show that is recorded and produced in Rochester NY, by Chip Dolce and Zach Anderson.  The duo is not new to podcasting, they formerly had a podcast in 1999 about video games.  Now the duo brings their talents to the Internet once more, but focussing on family, fatherhood, and humor.  They have been a featured podcast on iTunes, and have recently joined with CBS Radio’s play.IT podcast network, home to many well-known national celebrities podcasts and an audience in the millions.  Chip and Zach are now considered Internet celebrities in their own right.  New episodes of Making Dad are available every Monday. and can be found exclusively on CBS Radio’s play.IT podcast network,  in the iTunes Music Store or on their website at makingdadshow.com.

Brewmaster Jerry Scoppa is an avid homebrewer, and owner of the website AdventuresInHomebrewing.Beer , a site dedicated to brewing beer at home.  The site focusses on many ideas and thoughts in the world of homebrew, offers readers a chance to learn new things, and follow the journey of Brewmaster Jerry in his quest to create the perfect brew.

I got home, did some quick snipping, and then just sat and picked hops for almost 2 hours.  In “wet weight”, I got over 4 pounds.  I didn’t pick carefully, as the sun was going down.  I think had I gotten a good harvest time, and picked carefully, I would have gotten 10 pounds easily.

Enter the new vacuum sealer!  For a recent birthday present, I got a hop grower’s dream machine, the Sinbo DZ-280.  It seals, and re-seals mylar bags.  I packaged up the hops in roughly 10-12 oz bags using the gallon size mylar bags.

Ok, back to brewing.  I made a quick SMaSH recipe.  I used 6 pounds of pale malt dried extract, and just a little over a full pound of my freshly picked wet Nugget hops.  I did hop additions every 10 minutes, starting at 60 minutes of the boil, five ounces at right at the start, and about two ounces each interval.  I added a final ounce at flameout.

I decided to try the SMaSH style, single malt and single hops, to really get the full effect of my homegrown Nugget hops.  I have never made a SMaSH beer before, but figured I would give it a shot.  Let’s let it ferment for a while, then see what is up!  The original gravity was a paltry 1.048, so it will be more of a session beer most likely.