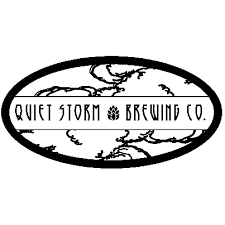 So, a few months back I got together with a few fraternity brothers for a night of brewing and tasting.  It is always great to get together with some great guys, taste some great beers, and see how others run their brew processes.  The first brotherhood brew was at my house, when I made Commandant Pliny.  This time, we went to Bill’s house.  Bill and Jeff were brewing that night, both are brewers for Quiet Storm Brewing Co.

The night was filled with REALLY tasty beers.  We tried some of each other’s homebrew, we dabbled in a  mini vertical of Founder’s KBS, 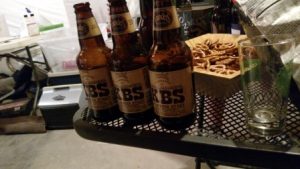 hit some different beers from outside the local area, and of course, I got to see the guys in action.  I will admit, this was a strange night for me, as I usually am the one brewing, so to be a spectator was a different experience.

I have always enjoyed tasting Bill and Jeff’s different beers.  A while back, I was with them when they said they should brew on a larger basis.  I agree, their beer is worth it!  Bill has been placing on a consistent basis in brewing competitions.  Tonight, they were brewing a Pliny clone and a saison that would be split into two different batches, one was a parsley, sage, rosemary and thyme, while the other was a cilantro lime.

I myself am a partial mash and extract brewer.  I use specialty grains, in small amounts.  So this was a treat to see a full all grain process from start to finish.  I showed up just as Bill and Jeff began to fill their kettles with water to mash in with. 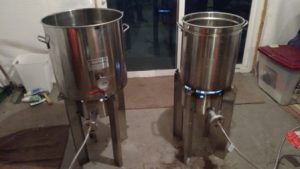 We started cracking beers.  As the night progressed, there were  a total of 5 of us there, and the bottle carnage added up as we shared some of our beer cellars.  I have a much greater appreciation for the difference in time for brewing with the all grain.

I loved watching the process and learning.  It was cool to see the tools that Jeff and Bill used to brew with.  They built some stuff themselves, and modified other pieces to fit their needs.  I think this is an important thing to remember, to be a homebrewer, you need to be a part time MacGyver (For those of you who don’t get that reference, I think I just dated myself).  You don’t need to buy the latest and greatest brewing equipment if you can build something yourself. 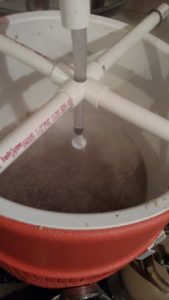 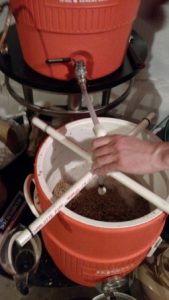 Jeff and Bill definitely have their own ways about their brewing, even though they brew together.  They have their own notes systems, ways of following the recipes, and even different measurements that they really focus on.

Bill has a great tradition that he does each year.  He saves a bottle from each batch he brews, and then tastes them all on New Years Eve.  I love seeing his check-ins that night on Untappd.  I think this is a great way to reflect on your brewing for the year.  Some beers may not hold up as well as they were fresh, but it is a cool idea.  This is one that I may shoot for next year.

The Brotherhood Brew is something that came out of nowhere….really it is more of an excuse for us to get together for some beer, chat about everything and anything, and brew some beer.  It is a great way to brew.  Honestly, I can’t wait for the next one.  (cough cough) Sully….I think you are up! 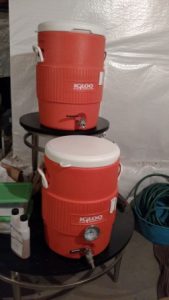 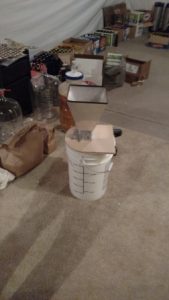 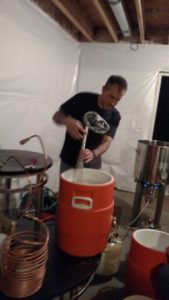 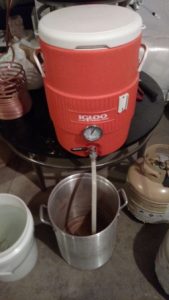 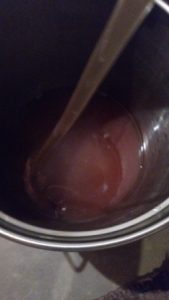 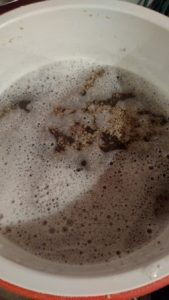 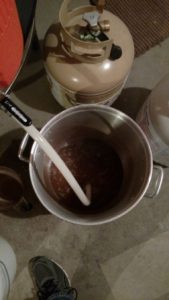