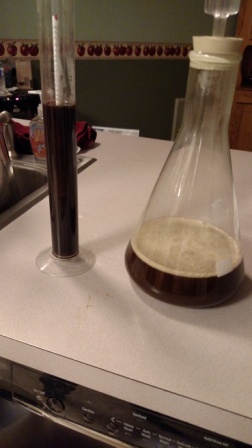 So I have been brewing for a little over five years.  You know what I had never done?  Yup, you guessed it by the title…I never had made a yeast starter.  Fellow Beer Nerd, Ricky, made a comment about a my batch of Lt. Topper.  I had a question about the viability of my yeast and pitched some dry yeast on top.  Here is what he posted:

I always make a starter before brew day. Not only does this give you enough yeasties to tackle all that wort, it also gives you an idea of your yeast health. You don’t need anything fancy either, I started with just a clear jug so that I could see the activity.

I had the tools, my wife got me a “little” kit a year back or so. But, alas, I was lazy, and now it was time to put it into practice.  Thanks to the nudge from Ricky.  According to industry leader, White Labs, a starter is good for the viability of your yeast, getting a lager batch ready, a high gravity brew (over 1.070), or if you want a fast start.

I decided that I was going to brew a Russian Imperial Stout while my wife was out for a girls night….but I decided to brew a little less than 24 hours before I needed my starter to be flying.  I smacked a pack of Wyeast Scottish Ale at 10:30 at night.  About 1:30 AM, I boiled 1 liter of water, and added 1 cup of dark malt extract (what I had on hand).  The boil for this was just 15 minutes.  Then, I poured the wort into a glass flask, and did a quick water bath in the sink to cool it down.  Once my temp was low enough, I poured the smack pack into the mixture.  I gave it some good swirls to move some oxygen in there to aerate it.  Then,  I put on a #10 stopper, a traditional 3 piece airlock, and filled it with some sanitized water.  I then put the beaker into a nice dark place in the cellar.

I noticed a nice “small” krausen layer beginning to form about 12 hours later, with a little activity in the airlock.  Another 10 hours later, my starter was ready to pitch into my RISing Mounds.  My brew day report will be coming soon about that brew!